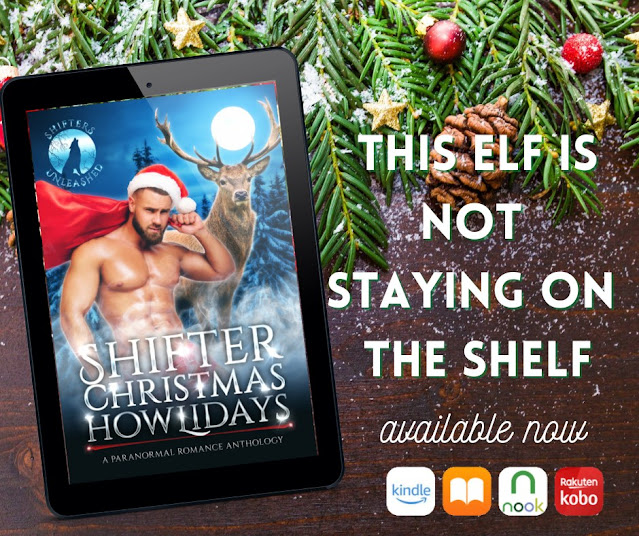 𝗦𝗵𝗶𝗳𝘁𝗲𝗿 𝗖𝗵𝗿𝗶𝘀𝘁𝗺𝗮𝘀 𝗛𝗼𝘄𝗹𝗶𝗱𝗮𝘆𝘀: 𝗔 𝗣𝗮𝗿𝗮𝗻𝗼𝗿𝗺𝗮𝗹 𝗥𝗼𝗺𝗮𝗻𝗰𝗲 𝗔𝗻𝘁𝗵𝗼𝗹𝗼𝗴𝘆 𝗶𝘀 𝗹𝗶𝘃𝗲!
Amazon: https://amzn.to/3mqS4ID
Universal: https://books2read.com/SU15
‘𝗧𝗶𝘀 𝘁𝗵𝗲 𝘀𝗲𝗮𝘀𝗼𝗻 𝘁𝗼 𝗴𝗲𝘁 𝗳𝘂𝗿𝗿𝘆!
Join USA Today Bestselling & Award winning authors as we come together to celebrate the Howlidays with steamy Shifter Christmas stories just for you.
Lions, Tigers, Dragons, Bears, Wolves, and more await you in this collection of holiday paranormal romance and urban fantasy tales.
Naughty or nice, escape between the pages and get swept away with the new book boyfriends waiting under the tree.
Stories guaranteed to jingle your bells.
But you have to hurry, this anthology won't last forever...
#paranormalromance #shifters #holidayromance #shiftersunleashed
at December 02, 2022 No comments: 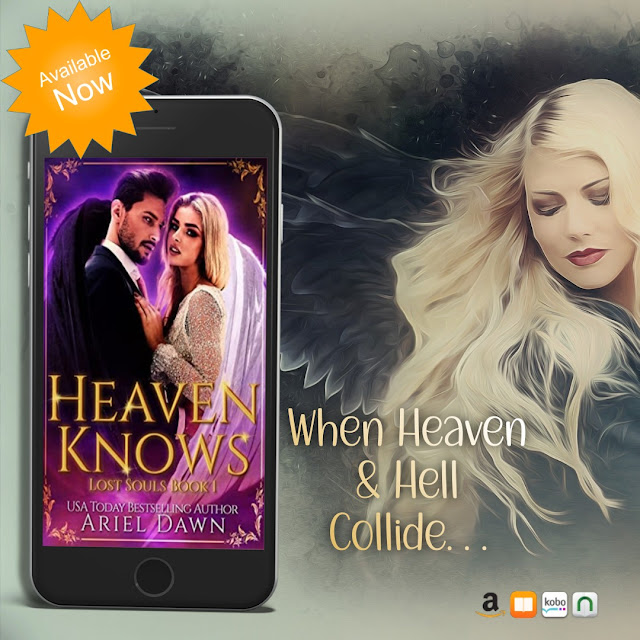 𝗛𝗲𝗮𝘃𝗲𝗻 𝗞𝗻𝗼𝘄𝘀 (𝗟𝗼𝘀𝘁 𝗦𝗼𝘂𝗹𝘀, #𝟭) 𝗯𝘆 𝗔𝗿𝗶𝗲𝗹 𝗗𝗮𝘄𝗻 𝗶𝘀 𝗹𝗶𝘃𝗲 𝗼𝗻 𝗮𝗹𝗹 𝘃𝗲𝗻𝗱𝗼𝗿𝘀!
Amazon: https://amzn.to/3hEjrA0
Universal: https://books2read.com/LostSoulsSeries1
Paperback: https://amzn.to/3EuWhFm
𝗪𝗵𝗲𝗻 𝗛𝗲𝗮𝘃𝗲𝗻 & 𝗛𝗲𝗹𝗹 𝗖𝗼𝗹𝗹𝗶𝗱𝗲…
Hell-born demon, Endor, longs for a life beyond processing souls in Hell’s Admissions Department. He wants to stretch his wings and roam the earth as a Contractor Demon, to hold souls in the palm of his hand.
The days are endless in Heaven for Valory, an angel who dreams of the kind of romance she reads in the books she borrows, waiting for someone to sweep her off her feet.
When a lost soul comes between Heaven and Hell, Endor and Valory must put their differences aside and learn to work together all while fighting against their celestial duties… and their darkest desires.
#angels #demons #gods #goddesses #paranormalromance #romanticfantasy #arieldawnbooks
at November 25, 2022 No comments: 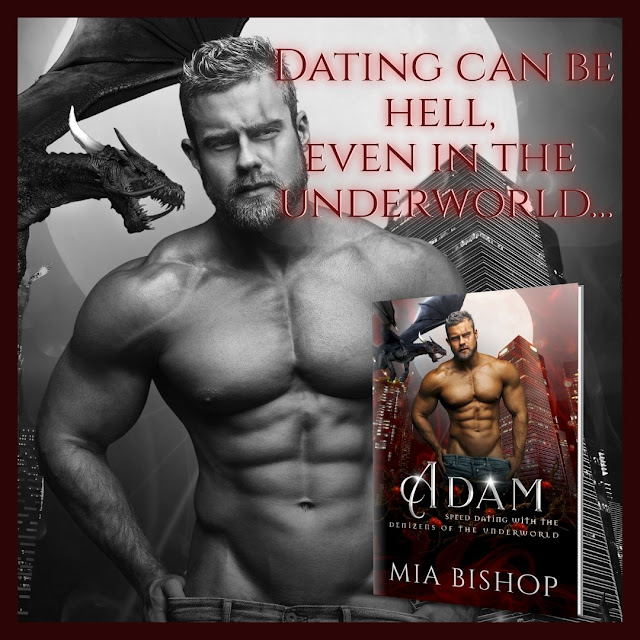 𝗦𝗼𝗺𝗲 𝘁𝗵𝗶𝗻𝗴𝘀 𝗮𝗿𝗲 𝗷𝘂𝘀𝘁 𝗺𝗲𝗮𝗻𝘁 𝘁𝗼 𝗯𝗲.
Fate intervenes when Adam enters DeLux Cafe one night. Amongst the crowd of Speed Daters, there is one person who sets his soul on fire.
Ella signed up for speed dating on a whim. Her carefully made plans start to unravel as her illness intensifies and she finds herself falling for the mysterious Adam.
Thrust into a world she doesn’t understand, can Ella accept the truth about herself or will Adam be too late to save her? 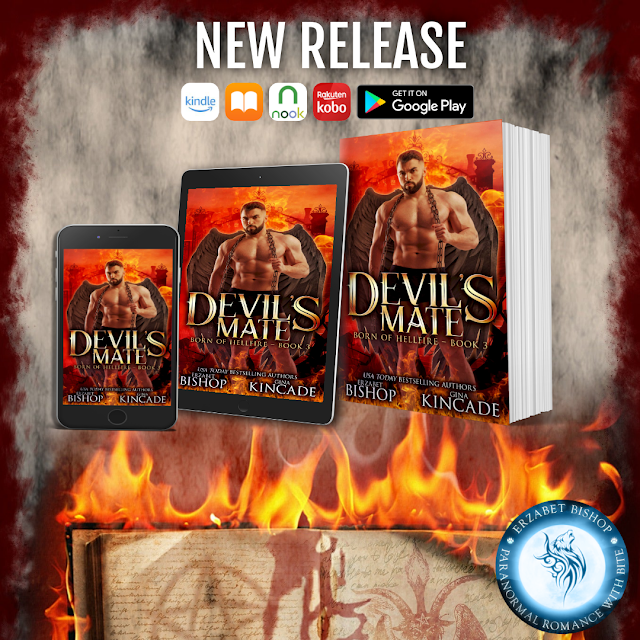 𝗗𝗲𝘃𝗶𝗹’𝘀 𝗠𝗮𝘁𝗲 (𝗕𝗼𝗿𝗻 𝗼𝗳 𝗛𝗲𝗹𝗹𝗳𝗶𝗿𝗲, #𝟯) 𝗯𝘆 𝗘𝗿𝘇𝗮𝗯𝗲𝘁 𝗕𝗶𝘀𝗵𝗼𝗽 & 𝗚𝗶𝗻𝗮 𝗞𝗶𝗻𝗰𝗮𝗱𝗲 𝗶𝘀 𝗹𝗶𝘃𝗲 𝗼𝗻 𝗮𝗹𝗹 𝘃𝗲𝗻𝗱𝗼𝗿𝘀!
Amazon US: https://amzn.to/3Se1WmY
Universal: https://books2read.com/BornofHellfire3
Paperback: https://amzn.to/3SaRih0
𝗦𝗵𝗲 𝘀𝗲𝗲𝘀 𝗽𝗼𝘀𝘀𝗲𝘀𝘀𝗲𝗱 𝗽𝗲𝗼𝗽𝗹𝗲.
Amity Rothchild’s life couldn’t get any more complicated. Born a Guardian against the shadows, she’s already faced her share of battles. Quitting her job as a barista to become an exorcist sounded good... until she tried paying the rent. No one ever told her she was about to become the keeper of a demon cat and two arcane texts that would most likely get her killed. Oh, and throw in one smoking hot hook up with a guy who may or may not be the Devil in blue jeans. Yeah. Complicated is her middle name.
𝗔 𝗯𝗿𝘂𝘀𝗵 𝗼𝗳 𝗯𝗹𝗮𝗰𝗸 𝘄𝗶𝗻𝗴𝘀… 𝗮𝗻𝗱 𝘀𝗰𝗼𝗿𝗰𝗵 𝗺𝗮𝗿𝗸𝘀.
Being the Devil is a full time job. Lucas Morningstar can attest to that. Disappearing demons, corporate takeovers, managing the seven deadlies, and a sister who wants him dead. Yeah. Whoever said it was better to reign in Hell than serve in Heaven hasn’t had to do it for the last several millennia. One night at a local bar brings him blissful salvation in the arms of a luscious brunette, but when all Hell literally breaks loose, can he fit all the pieces together before his one and only chance at happiness is taken away forever?
#paranormalromance #urbanfantasy #pnrlovers #shifters #demons #fatedmates #exorcist #possession #series #erzabetbishopbooks #newrelease
at October 14, 2022 No comments: 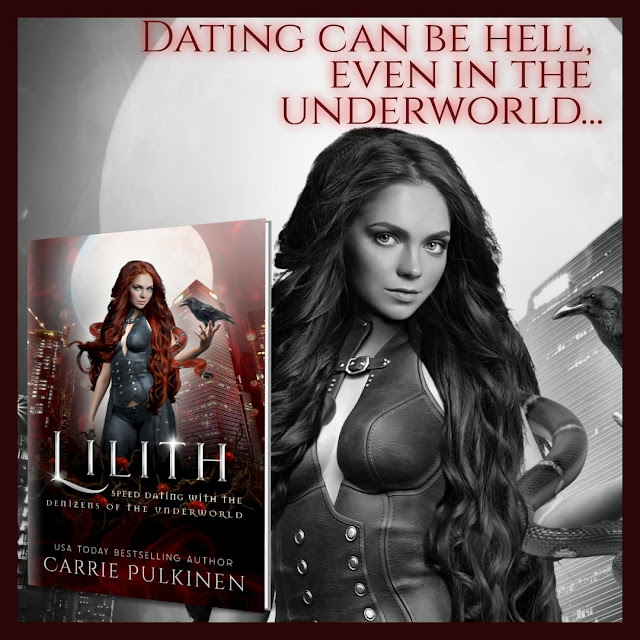 𝗟𝗶𝗹𝗶𝘁𝗵 (𝗦𝗽𝗲𝗲𝗱 𝗗𝗮𝘁𝗶𝗻𝗴 𝘄𝗶𝘁𝗵 𝘁𝗵𝗲 𝗗𝗲𝗻𝗶𝘇𝗲𝗻𝘀 𝗼𝗳 𝘁𝗵𝗲 𝗨𝗻𝗱𝗲𝗿𝘄𝗼𝗿𝗹𝗱, #𝟭𝟱) 𝗯𝘆 𝗖𝗮𝗿𝗿𝗶𝗲 𝗣𝘂𝗹𝗸𝗶𝗻𝗲𝗻 𝗶𝘀 𝗻𝗼𝘄 𝗹𝗶𝘃𝗲 𝗼𝗻 𝗮𝗹𝗹 𝘃𝗲𝗻𝗱𝗼𝗿𝘀!
Amazon: https://amzn.to/3QEvQAr
Universal: https://books2read.com/Underworld15
Paperback: https://amzn.to/3T520qA
𝗪𝗼𝗿𝗹𝗱’𝘀 𝗳𝗶𝗿𝘀𝘁 𝘄𝗼𝗺𝗮𝗻. 𝗪𝗼𝗿𝗹𝗱’𝘀 𝗳𝗶𝗿𝘀𝘁 𝘃𝗮𝗺𝗽𝗶𝗿𝗲. 𝗪𝗼𝗿𝗹𝗱’𝘀 𝘄𝗼𝗿𝘀𝘁 𝗮𝘁 𝗳𝗶𝗻𝗱𝗶𝗻𝗴 𝗹𝗼𝘃𝗲.
Lilith doesn’t believe in soulmates. If she couldn’t make it work with the man she was literally created for, how could they possibly exist?
She goes to speed dating on the hunt for a man to quench her thirst. What she finds instead will either rock her world or be the final stake in the Queen of the Night.
Owl shifter Spencer has learned his lesson with powerful women. After his last girlfriend derailed his career and nearly destroyed him, he’d rather have his feathers plucked one by one than let another woman sink her talons into his heart.
When his sister convinces him to go to speed dating, he can’t deny his attraction to the gorgeous crimson-haired vampire who captures his attention. But he refuses to get burned again.
Can two people who don’t believe in love find happiness together? Or will their colliding worlds go up in flames?
Lilith is book fifteen in the Speed Dating with the Denizens of the Underworld shared world, filled with sultry vampires, sexy shifters, and more.
#paranormalromance #Underworldseries #fatedmates #CarriePulkinenbooks #sexytimes #shifterromance #vampires #vampireromance #mythology #bookseries 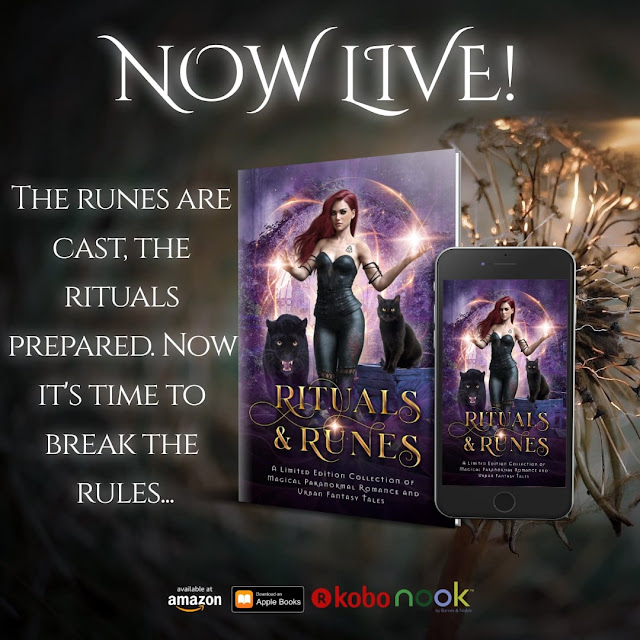 Snag your copy now for 99 pennies!

Fall under the spell of swoon-worthy supernatural heroes and magical heroines in fantastical worlds filled with dangerous adventures and epic romances.

💜Scroll up and secure your copy of BRAND NEW, unforgettable stories from your favorite USA Today bestselling authors and exciting up-and-coming talent before it’s gone forever!💜 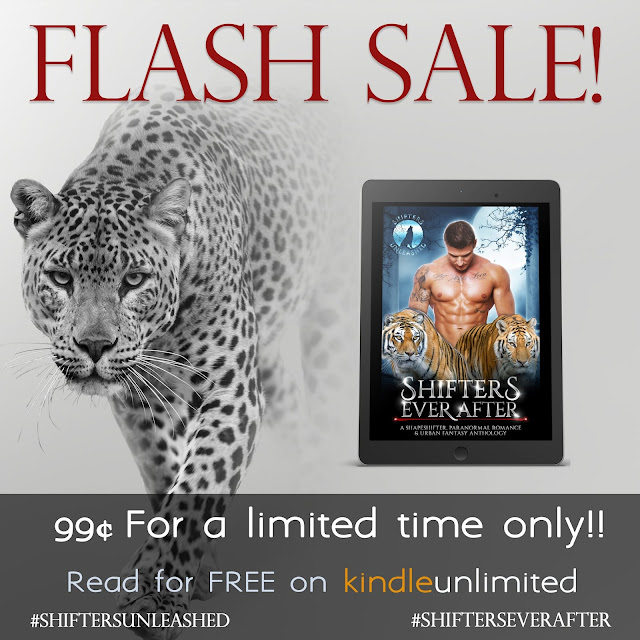